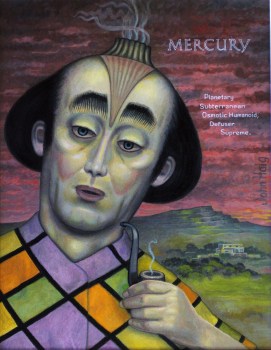 John Haig Hovnanian (1921-2013) had created on canvas a family of Planetary Creatures, nine in number, representing the various planets of our solar system.  These unique science fiction characters were painted with a fanciful and active imagination in contemplation of life beyond the planet Earth.  The paintings of each planetary creature (Venus, Mars, Pluto, etc.) are depicted with strikingly exotic and innovative descriptions.  He uses a variety of techniques, with stylistic elements and motifs, and a richness of conception and mood.

Completed between 1997-1999, the creation of these contemporary oil paintings were influenced by the advancements of the space exploration program.  The inspiring achievements of space exploration had captured Hovnanian’s imagination.  His depictions were created in recognition of the awesome advancements made in spaceflight.  The  exploration of other life, distinct from any life on Earth, has become part of the fascination of man’s eternal quest of the universe.

This artwork may not be reproduced without written permission.